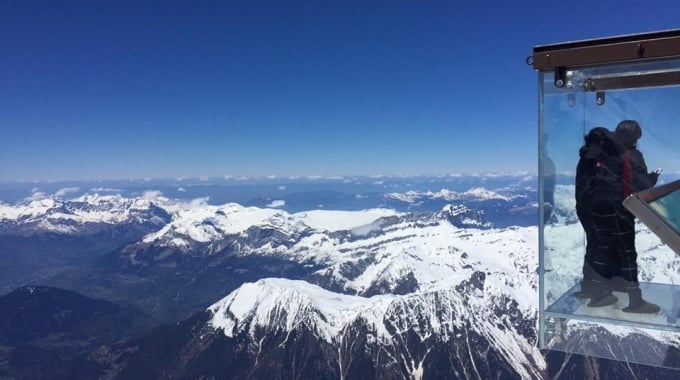 Simply Solutions is a company that prides itself in creating traditions. The majority of these traditions revolve around staff and more importantly, how staff are valued – and with Christmas 2015 also came the ‘Golden Ticket’ – to be presented to the team member who had ‘stood out’ from the others.

“Flights to Geneva for you and your partner, private transfer, 4 nights’ accommodation at the 5* Mont Blanc Hotel in Chamonix, 500 euro spending money, 2 tickets to ‘Step into the Void’ at the top of the Aiguille du Midi which overlooks Chamonix and Mont Blanc”

When I was presented with the ticket I just couldn’t believe it! The whole moment turned into a blur I was struggling to process what has just happened.

I think I walked around for weeks with a huge grin on my face. Firstly, I had to try to decide when to go – which sounds very easy, but in reality it was bloody hard going. No sooner had I decided and given dates to our Directors, than they had come back within an hour to say that was it all booked. I think I was still stunned, was I really going to visit the Alps?

The date approached a lot quicker than expected. I was finally accepting the fact that I was going to the Alps hence why my “lingo” had gotten a bit cooler (not sure everyone agreed with me though).

As I had never been to Cham before I asked Colin, Kerr and Ben to recommend some places to go. The guys were great. They supplied me with a list of restaurants, bars and activities. Little did I know the hidden gems that I was about to experience.

Our flight departed around 1.30pm and took roughly 2 hours. On our arrival we were greeted by Pete, our Chauffeur for the day, who drove us towards Chamonix. The scenery started to quickly change. The higher we climbed, the closer the mountains started to appear. Looking out the car window I glanced up to see the peaks of the mountains that were slowly but surely popping through the clouds. It was breathtaking.

As we arrived, I studied all the old style wooden buildings, they were like something from a Disney movie – it was so beautiful.

The Mont Blanc hotel was stunning, very glamorous – giant crystal chandeliers in the reception with a French modern decor. The view from our hotel room was breathtaking. It was like a painting or a picture out of a holiday brochure. Was I really looking at Mont Blanc?

Once we were settled we decided to go for a walk around the village. The air smelled of fondue and wine – it was delicious.  As were the hot stone steaks with dauphinoise potatoes!!

The next day was by far and away the highlight of the trip to Chamonix – the 3842 metre climb on a cable car to the top of the Aiguille du Midi and the infamous Step into the Void.

Our snowy climb began in the cable cars that took us on our adventure. I started to regret my spot by the window almost immediately as the cart started to climb the mountain at a very quick pace, which made it swing backwards and forwards, something which neither me nor Alan expected. We weren’t even near the top and we were already so high the Chamonix village starting to look like a speck in the distance. My ears started to pop as if I were on a plane from the change in altitude.

The cart moved up towards our final destination at speed, clattering into its final docking station some 3842 metres above sea level – that’s 2.4 miles straight up by the way. The views were out of the world. We were so high that we were actually above the clouds and light headed due to the thin air – it was literally breathtaking!

Next for us was the ‘Step into the Void’ experience – a glass box 2.4 miles up with nothing but sky below. I felt sick just watching others enter.

As we stood in the glass box, a gentleman took photos to capture our once in a lifetime experience. I was terrified.  It just felt strange to stand on something so high up that you could see everything below. Looking down made me feel wheezy, but it was over and done within a matter of minutes – 5 minutes can be a very long time btw.

I was so proud of myself, not just for getting into the void, but for being in Chamonix, for being able to experience something that very few people ever do.

Looking back, it is amazing to think about the things I have learned from my time in the Alps.

Thanks for reading about my story, and my Golden Ticket.